A Life of Hospitality

A Life of Hospitality

My first venture into the world of blogging is somewhat daunting! I have always had a burning ambition to write a book someday, making several good starts to the process a few years back. Anyone who knows me well might find this a bit strange as I rarely pick up a book to read, let alone set aside time for writing. I hope this foray into the world of blogging will be a little more successful. The plus-side - it's succinct, manageable, easy to chip away at. The down-side - it's succinct, and I'm a waffler...

So A Life of Hospitality, my first blog title, is me in a nutshell. Just like writing a book, owning a restaurant has been something that I've wanted to "do" for as long as I can remember. I'm happy to report that I'm living the dream - the proud owner and MD of Over the Moon Hospitality Ltd and the wonderful Derbyshire gastro-pub The Wingerworth Pub & Kitchen (www.thewingerworth.co.uk). 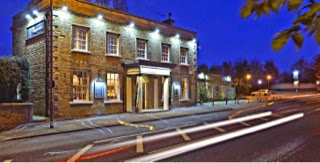 But how did I get to this point? Well that's a long story and I must be succinct... I think high school is where it all really began. I went into Nottingham High School top of my class with a scholarship (having turned down scholarships to two other schools) and spent the first three or four years largely fulfilling my potential - good grades, with side dishes of saxophone, piano, guitar, awards for art and literature, RAF cadets, football, rugby and more. We won't go into details of exactly what happened, but let's just say things went downhill a little from there. I sincerely apologise to anyone who had to teach me at through the A-Level years - it's no secret that I may have been a bit hard to handle. In fact, I believe I just about made it to the top of Mr Williams' "Premier League of School Idiots" after I wrote a [what I thought was] a witty satirical essay about him during my 42nd(ish) detention of the year. That earned me my 43rd detention and I'm told it was passed around the staff room a few times. Around the same time I was also told by our Head of Year that I had "until tomorrow to have a haircut, or you're out - Kurt Cobain died 10 years ago and thank God that haircut went with him." To be fair the man had a point and my Drivers License photo still haunts me every single day. Although I blagged my way through my GCSEs with mostly A's after not a single minute of revision, that approach didn't quite work out for my A-Levels. Don't get me wrong, my two B's and a C weren't disastrous, but it didn't get me into my law degree as planned. As a result, I bumbled my way half-heartedly through a horrifically boring Criminology degree (the Criminology wasn't so bad, it was that ridiculous subject of stating the obvious - sociology) until one day I mustered the courage to tell my parents that if had enough and wanted to be a chef.

Immediately good things started to happen. I joined Gordon Ramsay's Tante Marie Culinary Academy (you can find my profile featured on their alumni page, just under Neil Rankin!) and it turned out I was pretty good! I wasn't just passionate, I was obsessed - reading cook books in the library between classes, cooking constantly when I got home, inventing recipes and found myself top of the pile once again. I had classes with Adam Byatt, Tristan Welch, Tom Aitken and Gordon himself, as well as Commis-ing for Michel Roux Jr in the Masterchef kitchen.


Once I gained my diploma I went back to Nottingham and worked my way up the chef ranks in a few great restaurants. By far the most influential chef I worked with was a actually at my first job at Iberico - a guy called Jacque Ferreira. Jacque was (I guess like a lot of great chefs) a moody guy, but he was unreal. I learnt more in my few months with him than with anyone else since.  His food was incredible and he, like me, was really OCD about attention to detail. The saddest thing for me was to find out that he didn't even want to be a chef, he was just saving up to get his pilot's license.

This knowledge sparked a bit of a personal crusade of mine - why do so few people in the UK want to make a career in the hospitality industry? It's a respected career in both Europe and the US so why not here? Too many people see it as a "part-time" job or a temporary fix until they find a "proper" job.  My dream for Over the Moon Hospitality is to employ people who want a career, not just a job and from the outset we began to put all of the processes, rewards, recruitment and training in place to make this a reality. In return I expect the best from my staff - maximum effort every time they put on the uniform. Yes we serve great food and great drinks at The Wingerworth, but the thing that makes you stand out in this industry is great people and great service. I'm sure that I will blog about this repeatedly in months to come.

As I write this, we're making arrangements to attend our first awards ceremony next week as nominees in the Best Newcomer category. I'm proud to be sharing the evening with some of my best employees, as well as my wife and fellow Directors, all of whom have been through a lot this year!

The other big influence on me came from brothers Jonathan and David Perkins - owners of Perkins, The Carriage Hall and Escabeche. Fellow Old Nottinghamians ["old boys" from Nottingham High School], they were just a joy to learn from in my short time as Carriage Hall Supervisor. Everything about the business had to be "just so". Service standards were near flawless and I try to instill as much of this knowledge on my staff as I can. If you dine at The Wingerworth you will see the occasional small "nod" to Perkins, even in the way we fold our napkins. If you work for us however, you will see much more of what I learned there - the "behind the scenes" management processes in particular.
Perkins is also where I met our wine supplier, Peter Bamford of Modern French Wine - we'll be blogging a lot more about his wines later. Recently, Peter invited me to a South African wine tasting at my old stomping ground The Carriage Hall - there will be a blog about that to follow too.

I can't finish this first blog without briefly mentioning the real reason or source for the  blog title - my late grandmother Evhenia, who made a big impact on my early years. Firstly she was the one to teach me to cook with instinct - using a "pinch" or a "handful" instead of a "gram" or "litre" and to check the "taste" rather than the "recipe". She was the first to teach me how to knead bread and although her style was certainly rustic, it was genuine and from the heart. Secondly, although she never worked in hospitality (as far as I'm aware), she was the definition of the word. She was the one who called and held the family together, always with food. Too much food, just in case. There was always someone we didn't recognise at the Christmas or Easter table too - generally people who didn't have a family to spend the occasion with, but she always managed to find someone! A Life of Hospitality - that's what I try to emulate.
Posted by Unknown at 15:18