Treasures from the Lost City

I've been meaning to start a blog for some time now but time seems to always run away from me. Sitting here overlooking the stunning Caldera lagoon on the Greek island of Santorini seemed like a good time to start - time is in abundance. The vast lagoon itself is in fact the crater of an enormous volcano and the site of one of the largest eruptions on record - an eruption that formed the breathtaking landscape as we see it today and wiped out the Minoan civilisation with a huge tsunami along with [allegedly] the lost city of Atlantis. Whilst the views are certainly astonishing, the food and drink geek inside me was primarily interested in how this all affected the local produce. Santorinians are certainly proud of their food and wine in particular, so I had to find out more.

I must confess I was sceptical about Greek wine. Not because I had particularly heard bad things, but more that I just hadn't heard anything. I had visions in my mind of barely palatable "rustic" table wines, but what I actually discovered was far from that. So why have I never heard of it? Well, I think the Greeks probably just want to keep it for themselves! They have certainly had plenty of time to perfect the process, with excavations of the ancient city of Akrotiri revealing evidence of wine-making dating as far back as the 3rd millennium BC.

The wine is distinctive and unique, just as is the ecosystem here. Continuous volcanic eruptions and flowing lava fields have made the soil particularly absorbing and porous, as well as being full of minerals. Low levels of rainfall require thinking outside the box in order to keep the harvest hydrated and the resulting cliff side vineyards are both stunning and practical - allowing easy cultivation and maximising absorption of water as it flows down the cliff face. Another big success for wine makers results from the trapped humidity and morning dew evaporated from the Caldera. To maximise its effect, the locals have developed a unique pruning method, curling and weaving the vines into a basket shape at ground level. Incidentally, this also protects them from the strong sea breezes, which give the wines their characteristic high acidity. 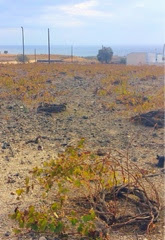 Argyros Santorini Assyrtiko, 2013
The first two wines I sampled were from one of the oldest vineyards on the island, some parts of which are over 150 years old. Georgios Argyros set up his 5 acre traditional vineyard in 1903, selling his wines at the local market. His grandson Yannis inherited the site in 1974 and since then has grown its size to over 65 acres. Before I begin any brief tasting notes, I must confess from the outset that the vast majority of wines in Santorini are white, which isn't my preference. And they are dry, crisp whites, which if I'm drinking white isn't my preference either. But when in Santorini... Assyrtiko is the indigenous grape variety of the island so the majority of wines produced are either exclusively or a blend of that grape. Argyros' Assyrtiko is taken from a single vineyard in Episkopi Gonia, using 50-60 year old vines. Their low yield produces a big body to the wine and although crisp and refreshing, their acidity wasn't quite as mouth-puckering as the Gaia equivalent, which it describe further down. Robert Parker certainly rates this wine, consistently scoring it in the high 80's and low 90's across vintages. In addition, it bagged a Gold Decanter Award in 2010. I have to say I disagree and that this was the least enjoyable Assyrtiko that I tried - well, it's just a matter of opinion. First off, there was a big unpleasant waft of bottle stink as I popped the [incredibly sexy, black] cork. Once this had blown off, I detected a strong mineral aroma, almost metallic and the wine had a heavy citrus palate. The mineral quality is clearly a product of the volcanic soil and is abundant in all of Santorini's wines. One thing that does strike me about Santorinian wines is the quality of their bottle presentation - whilst I appreciate you should never judge a book by its cover, I do believe that you eat [or indeed drink] with your eyes first so labelling and bottle selection is important. And I supposed the backdrop helps...
Vivino Score: 3.0 stars 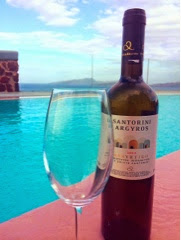 Argyros Atlantis White, 2013
This wine was in fact a delightful unexpected welcome drink from our hotel, which I managed to save until day two. Again, Assyrtiko came to the fore and the same citrus and mineral composition dominated the nose and palate. It was just more "drinkable" than the previous wine. Earlier that day, we had visited the Gaia Winery and stocked up with more samples - as we were guided through our tasting at the vineyard we were told to decant the wines just like a red to release the full flavour. With no decanter on hand at the hotel, I decided to re-cork half of the Atlantis and come back to it the next day to see if it made any difference. Did it just! Although the original characteristics were still present, the wine's first flavour had now developed a floral quality, followed by a more tropical fruit flavour, then came the citrus hit, which lingered on as a result of the acidity.
Vivino Score: 3.5 stars [4.0 stars on second day]

Gaia Thalassitis, 2013
As mentioned above, we took time out of our whistle-stop tour of the capital Fira to head down to the coast and taste some wine at the Gaia Winery. A relatively young venture, it was founded in 1994 by Leon Karatsalos and Yannis Paraskevopoulos, who dreamed of producing award winning wines from indigenous grape varieties. Thalassitis was their first wine and is still a staple of their production, which has grown somewhat from their first run of less than 1,000 bottles. Thalassitis now constitutes the largest proportion of their operation, with over 100,000 bottles out of a total 350,000. It is, of course, made from the Assyrtiko grape and their version quickly rose to the top of the pile in its regard as one of Greece's best whites. Its name, Thalassitis, is taken from the ancient practice of mixing wine with sea water, which I was glad to find no longer occurred, but the vineyard's close proximity to the sea gives it characteristics appropriate to the name. Unlike the previous Assyrtikos, I noted a clear honeysuckle and mineral aroma on the nose. I also picked up a feint sulphurous tinge, which the woman guiding us through the tasting seemed a tad affronted by. On the palate the mineral subsides and is replaced by yellow citrus and just a hint of honeyed sweetness. This balanced its higher acidity, which I assume came from close proximity to cool sea breezes.
Vivino Score: 3.5 stars

Gaia Thalassitis Oak Ferment, 2013
Giveth wine some oak and Andrij will drink it! This was definitely more up my street. The flavour profile of the wine was largely the same as the previous wine, but the oak ageing gave it better balance in my opinion. The finish was now more opulent and slightly oily, clinging to the palate and complementing the acidity well with a hint of vanilla and even a bit of spice. Although its name suggests otherwise, this wine is aged in a combination of oak and small acacia casks over a period of 7 months, so the oak isn't too heavy.
Vivino Score: 4.0 stars

Gaia Agiorgitiko, 2010
To my surprise, this red was far from the "table wine" that I half expected. I suppose I should have known better by now, but I had been told that similarly to English wine, it was better to stick to white here. Grown at their sister vineyard in Nemea on the mainland, this wine had bold, ripe plummy flavours that gave way to spice and  pepper from it's six months in French oak. The finish was long, with hints of a tannic bite. Scanning back over my notes, I thought it would be perfect with sticky BBQ ribs.
Vivino Score: 4.0 stars

Gaia Vinsanto, 2004
I'm not sure what struck me as more surprising - that my first 5 star wine was a sweet wine, or that it was from a small Cycladic island in Greece! All I can say is wow! Vinsanto is a local speciality and it certainly is special. Dating back to the 7th century BC, it is still made in a very similar style. Gaia's offering is a blend of mainly Assyrtiko, with Athiri and Aidani. After hand-picking the grapes, they dry half in the sun and half in the shade in order to preserve some of the freshness of the fruit and acidity of the Assyrtiko grape, which gives it stunning balance. The wine is matured in old oak asks for 10 years(!) and with no fining or filtration to tarnish the flavour, the result is brilliant. The 2004 is their second Vinsanto and  with just 2,500 bottles produced (and none available for export to the UK) I feel really honoured to be taking one home with me. Pouring from the bottle it reminded me almost of maple syrup - sweet, thick and unctuous. Flavour-wise I get a really rich honeyed caramel, tobacco and  leather hit, followed by a subtle mineral creeping in towards the long finish, which can't help but leave a smile on your face. At €35 from the vineyard itself, I'd hate to think what I'd be buying it for if I stocked it at the pub, but it would be worth every penny.
Vivino Score: 5.0 stars 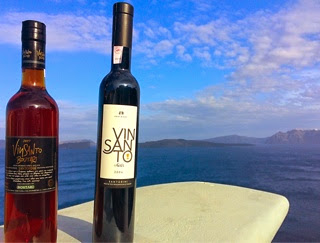 Santo Nyktari, 2013
I couldn't leave Santorini without trying a wine from a co-operative. Founded in 1947, Santo Wines is just that and Santorini's biggest producer. In comparison to the other producers that I tried, they champion technology over tradition, which I must confess I sort of like. When cooking, I love molecular gastronomy and all the modern techniques, so why couldn't this be a good thing for wine too? Santo is built on five levels down a hillside, allowing the must to be transported from one stage of the process to another by gravity alone. The lack of pumps not only preserves the integrity and quality of the product, but I imagine it's much more economical, thus securing an additional brownie point. Like the Vinsanto, santo's Nykteri is a blend of Assyrtiko with Athiri and Aidani and I found it much more complex than the basic Assyrtikos. On top of the usual qualities, I picked up a bit of ripe pear and strangely, what I can only describe as some bitter green tea. 3 months in oak (yay!) also gave it a subtle smokiness. Lovely. Reviewers seem to rate it consistently highly and it picked up a Bronze Decanter Award in 2008. I agree - a very nice way to round off my exploration of Assyrtiko.
Vivino Score: 4.0 stars 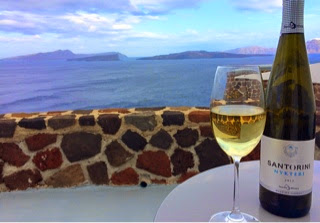