One Hell of a Beer! 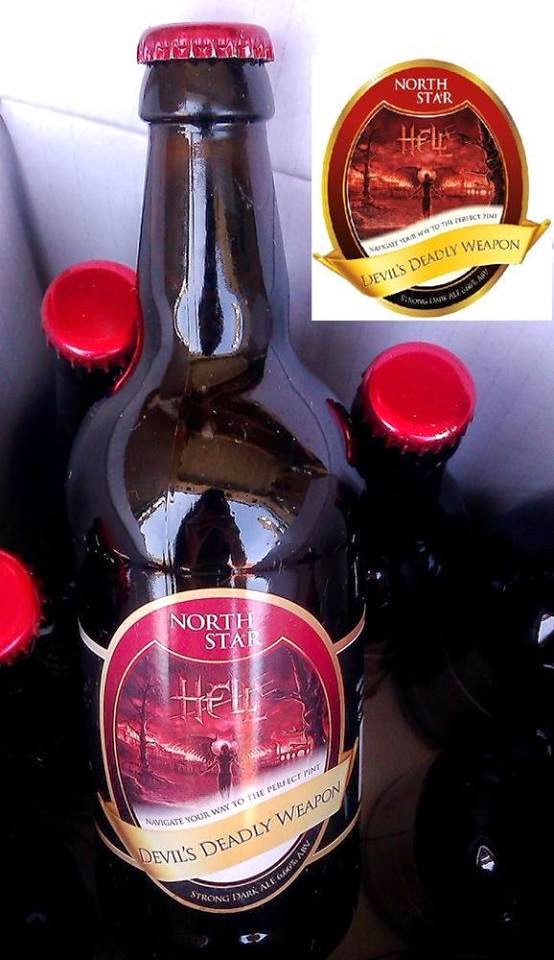 So last night I found myself making a stew with "leftovers" in the fridge and as everyone knows, a good stew needs a good beer in it. Blundering through the garage I stumbled across a few boxes (!!! hurrah!..) of ale from my father-in-law's North Star Brewery. The ale in question was a 6.66% beast called Devil's Deadly Weapon brewed exclusively for his two brothers' mega metal band Hell. Had to be worth a punt, right?...

Devil's Deadly Weapon, North Star Brewery, 6.66%:
The instant thought I had when pouring was porter - a dark, dark ruby colour, with an aroma that was undoubtedly coffee, rich dark chocolate and lashings of smoke [straight from the fires of Hell...]. One of the reasons that I really love porter is that it's history is just as mysterious and smoky as it's character. The other thing I love are the parallels in the process of its production with wine. In February last year I was invited to judge the Porter category in the CAMRA National Winter Ale Festival in Derby - a real treat - and since then my love for porter and dark ale has just grown and grown.

One popular belief of the origin of porter is that it was created by/for the transportation workers [porters] in Central London in the 1700s, who blended an old (stale) ale with a new (brown) ale and a pale ale, to result in a strong, flavoursome beer typically with an ABV of 7% or higher. The "stale ale" element may be of surprise, but this was supposed to give an acidity to the beer, balancing the sweetness of the roasted malt. Just like a great red wine, this great red beer was also traditionally aged in huge wooden maturation vats [some of which were reported to hold half a million gallons!] for several months to develop the characteristic roasted smoky flavours. As popularity and demand for porter grew, brewers tried to find new ways to bypass the long production process, such as adding molasses and burnt sugar to artificially achieve the deep colour [Chaptalization in wine anyone?...]. It is also rumoured that some brewers added intoxicants such as opium to addict consumers to their beer - a Hell-ish trick you might suggest...

The good news is that these practices no longer exist in the modern production of porter, but the even better news is that nevertheless, the beer still retains the traditional characteristics. Generally they are brewed with a combination of pale, black, crystal, chocolate and dark brown malt and although Richard labels this beer as a "strong dark ale", I wouldn't be surprised if the Devil's Deadly Weapon was brewed with a combination of at least a few of these. Equally, the brewer suggested initial port wine flavours, but I disagree strongly - it's bigger and more sinister than that, and not as sweet. The main flavour profile for me is treacle, liquorice, Marmite, bitter dark chocolate, burnt coffee and of course, that smoky finish. If any fruit fights its way through that onslaught, it's more at the fig, date and plum end of the spectrum. I loved it - a whole bottle went into the stew and I pretended to fancy baking some infused soda bread, just so I could open and polish off a second bottle.I have to mention that according to the bottle, the beer was past its "best before". Again, I stubbornly disagree. Porter (and other strong ales) mature just like wine and are best with a bit of age. Take Fuller's Vintage Ale - I think that the 2007/2006/2005 vintages are just peaking now - this beer is only just beginning to get to its best! Give it a chance! Here's the recipe for the soda bread - it is ever so easy, give it a go...

Preheat the oven to 180 degrees C. Mix all of the dry ingredients in a large bowl and make a "well" in the centre. Slowly trickle in the buttermilk and ale, while mixing into the flour with a fork. Once the dough has come together, add the treacle and knead gently by hand for a few minutes. The dough should be firm (but not hard) and slightly tacky (but not sticky or wet). If it's too hard, add some more beer, if it's too wet add more flour.

Roll the dough into a fat sausage shape and slash the top with a sharp knife. I use a silicone loaf tin to bake, but a well greased and lined metal tin is just fine. Bake for half an hour, drizzling more treacle on top 5 minutes before it's done. Leave to cool on a wire rack and it's done.
Posted by Unknown at 12:27