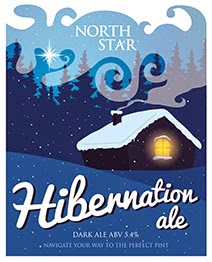 I heard something very refreshing the other day, which got me thinking about ageing real ale - I was desperate to pull a cask of 5.5% winter warmer ale from North Star through the lines at the pub, basically because I was eager to try it [I'm not ashamed to say...]. A member of my staff almost physically stood between me and the cask and sternly told me that it needed more time, because it had only had 24 hours stillaging and 24 hours venting. He was right - higher ABV beers do need longer to settle and to vent, with the process being very similar to the idea of decanting in wine. In my opinion keeping a good real ale cellar is the single most difficult thing that you can do in a pub. It may seem a bit crazy, but each ale does  have it's own personality and temperament; some will be angry and fizz out at you when you tap the barrel, some will be stubborn and require a longer venting time to bring out the flavour. Just like people, they don't like it when it's too hot or too cold, as this will either speed up or stop the natural fermentation process.

The most difficult part of cellarmanship to perfect is the venting process - too much and you're left with flat beer and too little and the ale will be too fizzy, almost like lager. In the case of higher ABV beer, it does requires longer to vent and release the excess carbon dioxide so my diligent staff member was absolutely right to stop me in my tracks. But cellarmanship and the venting process isn't the real concern of this blog - I'd like to talk about really ageing beers. When bottled, brewers will happily put a best before date a year or two into the future on it, but when in cask 3 months is probably the most that you will see. According to the guys at the Brewing Sciences department at the University of Nottingham, there shouldn't really be much difference - both are sealed, airtight containers that have been cleaned and sterilised just before filling. I'm just going to put it out there that the difference is simply that a bottle is disposable, whereas a brewer wants his cask back to refill as soon as possible...

Even after a year or more, beer won't go off as such, it will just taste different.

Some people make an artform of ignoring the best before dates - they are so in tune with the beers that they sell, they  will tell you when the beer is best. Must be a nightmare for brewers... Around Christmas-time all the "big" beers come out and I know of one particular pub in Nottingham, where the landlord will buy a cask of a particular ale around about now, for Christmas 2015. This Christmas he will be pulling through 2013's purchase. Why? Because just like wine, beer matures and mellows with age; it's highest and lowest notes will be smoothed out. This is particularly the case for bottle-conditioned beers [and casks], because the yeast is added at the very end of the manufacturing process - the longer it has to work with the beer, the more it will impart flavour. Just as with spirits, higher ABV beers will have a "hot" top note from the higher alcohol content, which will mask the other flavours if it isn't left to mellow with time.

So which beers are best to mature? Well in my experience heavily malted beers are best. Although hops are partly added to beer to act as a preservative, the flavour of the hops fades relatively quickly so it is arguably a bit of a waste to mature heavily-hopped ales. Generally it needs to be higher ABV because the alcohol acts as a preservative too, so we're talking strong, dark ales - porters, imperial stouts or even barley wine.

One of my favourite annual traditions is to buy a mixed case of Fuller's Vintage Ale, which then
becomes almost a scientifically detailed 'vertical tasting'. Some we drink almost immediately, but some go into storage for the following Christmas, or even several Christmases to come. Fuller's even recommend to try now, in five years and in ten years. If you don't mind splashing out a bit, there's a 'boxed' case, which looks prettier and gives you a few of the older vintages (back to 2006 this year), but costs £4.16 a bottle. For just £2.91 a bottle, you can buy an 'unboxed' mixed case that usually has two of the latest vintages. But in my opinion Vintage Ale needs to be at least 5-6 years old to be at its best, so you'd have to store these for a good few years yet.

Luckily, we've been amassing this festive treat for a number of years now, so I'll be trying the 2005, 2009, 2011 and 2012 vintages, just to provide a good comparison of how they mature with age. Fuller's do change the recipe slightly each year - using the year's best hops and malt, but the colour, bitterness and ABV of the beer remains the same. Bearing in mind that this is a really great beer to begin with, I've scored each one to the nearest 0.1 stars, rather than my usual 0.5 in order to differentiate between them more easily. 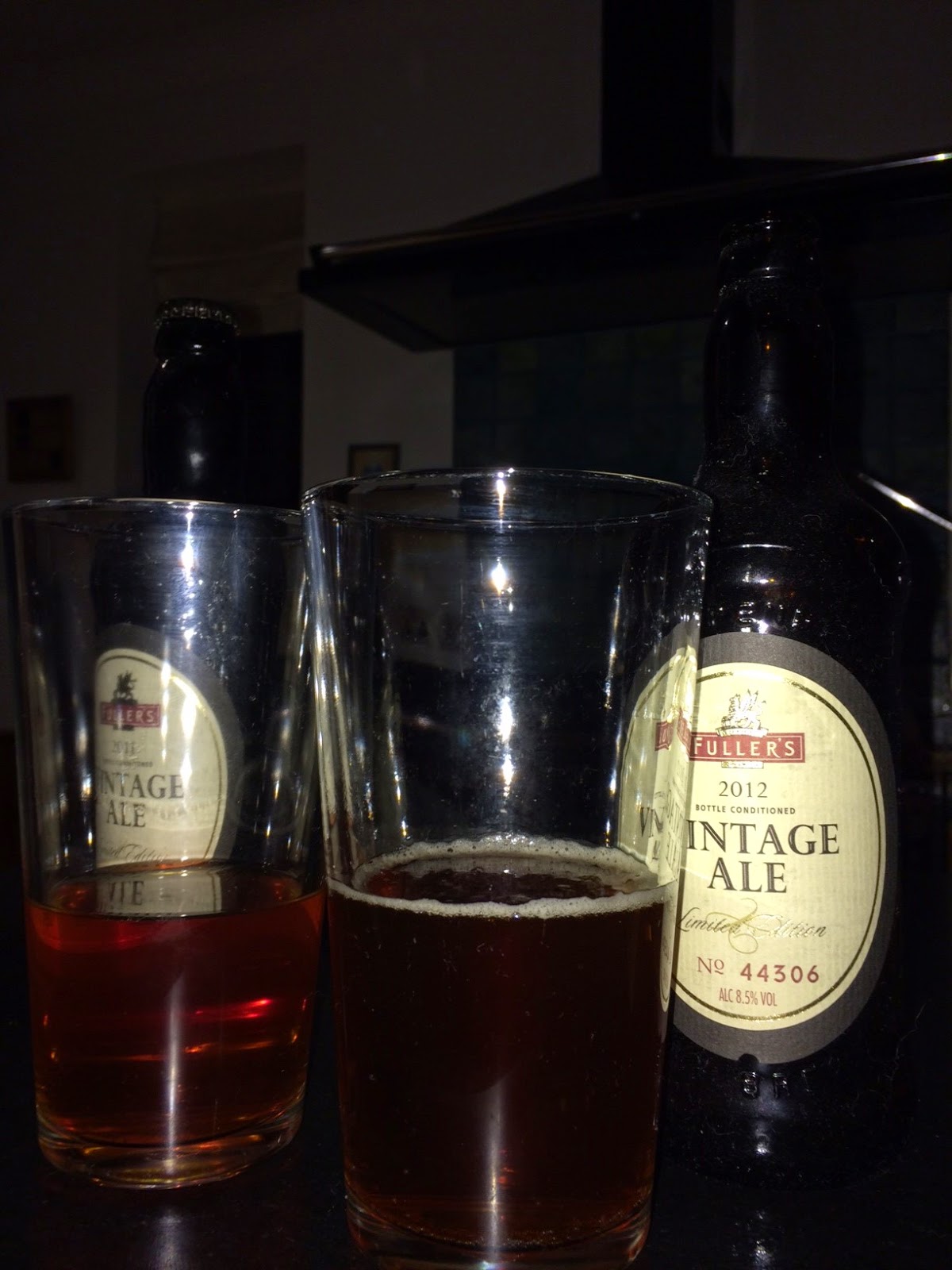 This edition of Vintage Ale is brewed with a combination of Goldings, Sovereign and Target hops. From the Goldings we'd expect citrus (grapefruit or orange), from the Sovereign there will be a more savoury herby element and the Target will again add citrus and spice. Pouring the bottle I immediately noticed how fizzy it was and that the beer didn't hold it's head for particularly long indicating that in the ideal world, it isn't quite ready. There hasn't been enough time for oxidation to complete and for the beer to mellow. The nose is heavy - boozy raisin followed by marmelade and a hint of something like treacle with pepper and spice. On the palate the bitter marmalade hits immediately, before mellowing into a young (perhaps too young), peaty single malt with sultanas and raisins. Then bitter sweetness comes back in with treacle, marzipan and lingering finish of orange pith, raw spices and burnt caramel. Although it has great depth of flavour, the bitter top notes are still just far too strong in the 2012. Make no mistake, this is still a great, great beer, but I know what it will be with another 3-4 years - the caramel will add more sweetness the mouthfeel will be smoother, the bubbles will subside to make it less lager-like and the single malt will really come into its own.
Beer Score: 4.3 Stars

Fuller's Vintage Ale, 2011:
In the 2011 version, the Target hops are substituted with the even more heavily orange/marmalade First Gold hops. Although the beer was still fizzy, it was less so and the head retention was much better. This was partly due to the slightly higher viscosity of the beer as a result of longer maturation and gave the beer a much smoother and more opulent mouthfeel. Sadly, but somewhat interestingly, it had closed up just as wine does in stages of its maturation. It wasn't offering much, even with a good half an hour in the glass to aerate. The nose was particularly stubborn, but did offer a surprising over-ripe red apple aroma, along with something sweet and buttery - perhaps toffee. There was little citrus in the palate too, with the immediate flavours being apple, pear and sour cherry, followed by a sweet, peppery mandarin and peach finish, again with the burnt caramel element. There isn't really too much more to say about this one - let's leave it a year or two and see if it opens up again.
Beer Score: 2.5 Stars
Posted by Unknown at 14:44